GAME HAIR HAVOC IS BACK FOR 2021 SEASON 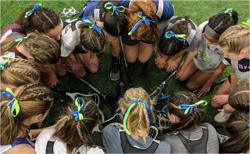 ABOUT THE CAMPAIGN Game Hair Havoc is an online fundraising campaign encouraging players and teams to style their Game Hair in an effort to raise awareness and funds for families affected by cancer.

HEADstrong made history in 2019 together through Game Hair Havoc.  A monumental campaign, focused on the empowerment of athletes. Driven by people like you, we created a viral social media call to action which engaged over 16,000,000 participants in more than 35 countries across the world.  The campaign raised over $176,000  and generated more than 94,000,000 profile views.  It also allowed us to achieve the largest social media audience among cancer charities in the US! Game Hair Havoc has officially begun and runs from February 22nd to April 4th, 2021. Watch the video clip about the campaign and learn more about our campaign & the original leader Steph Finley below. 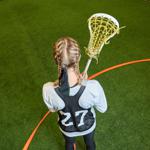 The Game Hair  Havoc campaign is back for a 3rd season, giving a way for women’s lacrosse teams across the country a way to compete against each other while helping families who are fighting cancer. The campaign, which will officially kick off on February 22nd and run through April 4th, is an online fundraising campaign that encourages women’s lacrosse players and teams to braid and style their game day hair to raise awareness and funds for the HEADstrong Foundation and families affected by cancer.

This season, for the first time the Game Hair Havoc campaign will feature two heroes – Marsie Salvatori and Mary Griffin.  Former high school teammates who had lost touch once at college, they have been brought back together as both are currently battling cancer. Salvatori, a senior at Stanford University and a former member of the women’s lacrosse team, was diagnosed with Hodgkin’s Lymphoma in August and has been undergoing chemotherapy since. In the fall, Griffin had an “Appendicitis-like” attack while participating in lacrosse practice at Virginia Tech and was later diagnosed with a rare form of Pancreatic cancer. In November, she had surgery to remove the tumor.

“Our fundraising team has consistently challenged themselves to create a unique way to engage and unite players and teams in support of our mission and I am excited that Game Hair Havoc is back for a third season, especially in these challenging times,” said Cheryl Colleluori, HEADstrong President and Nick’s Mom. “Hair styling and braiding is an amazing and empowering phenomenon in women’s sports that provides an incredible opportunity to further our commitment to heroes fighting this terrible disease. Our hearts are with all women fighting cancer and those who have lost their hair as the result of chemotherapy.   We are honored to fight alongside our heroes, Marsie and Mary, and proud to continue this amazing campaign.”

WELCOME TO PHILLY GIRLS, we're back on the field!!!

HEADstrong Philly Girls have been back on the field since  June 15th and  going strong. As of August 2020 we are conducting evaluations for open roster spots on our teams. Evaluations are only for new players. Clicking the TRYOUT link below for more information or  CLICK HERE to go to the registration page.

In lieu of "large gathering" tryouts as in the past, HEADstrong is providing prospective players with small group evaluations  in August 2020. Please contact our General Manager of Girls Programming, Jess  Scannapieco @ 215.987.9078  regarding evaluations and/or register below. After registering, Jess will contact you with an evaluation date.  Registration is through League Apps, so you may need to create a new account.

IT'S HERE!! HEADstrong Philly Girls HIGH SCHOOL FALL LEAGUE begins on Sunday, September 13th @ Penllyn Woods, Blue Bell PA. The league is limited to local high schools and players, and will be full field with current US Lacrosse/NFHS rules. The league runs for 5-weeks from Sept.13th to Oct. 11th.

WANT TO JOIN IN ON THE PLAY?  Individual roster sports are available on the HOUSE TEAM for players 9th to 12th Grades...CLICK HERE to register for an individual spot on the House Team. COST IS $40 for individual registration.